How can we help you today?

Here we can sync with the ACE Could server for the latest application recommendations and manually run an examination of our application portfolio.

Starts an ACE examination that will update the rationalisation and normalisation recommendations available from the GRid Context Menu. Also, will run any automatic actions that have been enabled in the ACE Engine

Will automatically refresh the recommendations about once a week.

Auto accept applications that are recommended as Accept by ACE, have at least X Users, and are Y days in Pending. The Version Threshold is used to either rationalise these Apps to existing versions of applications in the accepted queue or accept them as a new application.

Auto reject applications that are recommended as Reject by ACE, have at most X Users and are Y days in Pending 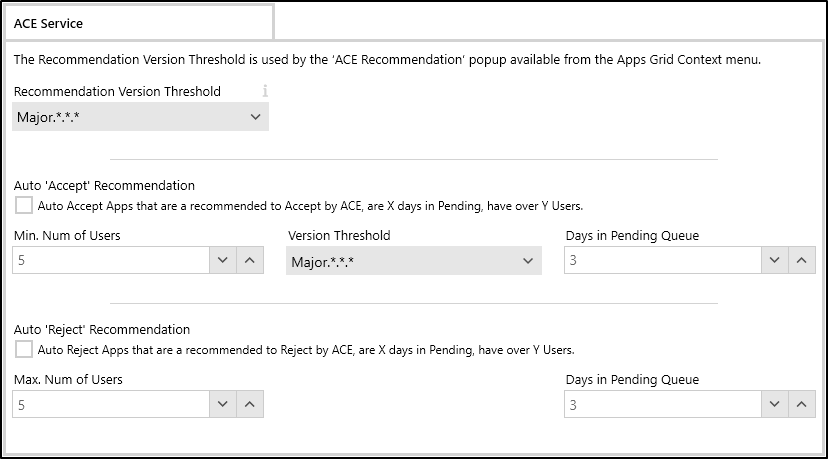 Normalisation is the process of cleaning up Applications names and making them more consistent across multiple products from the same vendor.

Rationalisation, Acceptance, and Rejection make use of rules to determine if an Application should be acted upon. It should have reasonably high ‘Days in Pending’ thresholds set to give the Apps Team adequate time to make these decisions for themselves and only fall back on these rules to keep Apps moving when the Pending queue has been forgotten or neglected.

Auto-Rationalisation can rationalise (supersede) applications from Pending into the Accepted queue. There are two different checks an application can meet that will result in it being rationalised.

An application can be rationalised to the same or higher version in the Accepted queue for a given version threshold and must also be in Pending for X days.

An application can be rationalised to the same or lower version in the Accepted queue for a given version threshold and must also be in Pending for X days.

Note: It is recommended to set the version threshold lower for this rule so that only minor versions of applications can be rationalised to a lower version.

Auto-Acceptance can auto-accept applications that are X days in Pending, have over Y Users, and have no matching version in the Accepted queue.

It is recommended to keep the Version Threshold high (Major.*.*.*) so that only new major versions of applications can get auto-accepted.

For Example, it can be set to auto-accept applications that have over 10 Users, have been 3 weeks in Pending, and have no matching Major version.

Auto-Rejection can auto-reject applications that have X Users and are Y number days in Pending.

For Example, it can be set to auto-reject applications with less than 5 Users and are in Pending for 3 weeks.

Version Thresholds provide a way to control which versions of pending applications the ACE engine will operate on.

This setting is NOT recommended as ALL versions are matched to a single version. This is generally too "aggressive" when considering application rationalisation and other processes which use Version Thresholds.

This setting is recommended for most scenarios as each minor version is rolled-up into the highest major version (the part in bold).

Did you find it helpful? Yes No

Send feedback
Sorry we couldn't be helpful. Help us improve this article with your feedback.