How can we help you today?

The Dependencies Tab provides the ability to designate which other objects are required in order to successfully deliver a product. For example you may have a piece of software that would not work without Foxit Software Reader and Adobe Reader as per below. There is little point in rolling out software if the dependencies aren't also ready.

Dependencies aren't just linked to software, it is possible to have dependencies on devices, users, deployment units, bespoke objects etc. This means that complex dependency trees can be built. When the status of one branch of a dependency is changed, it's possible to see what impact that will have on the whole product.

In the example below, an Application dependency is shown, however this functionality is available across users, devices, bespoke and deployment units. 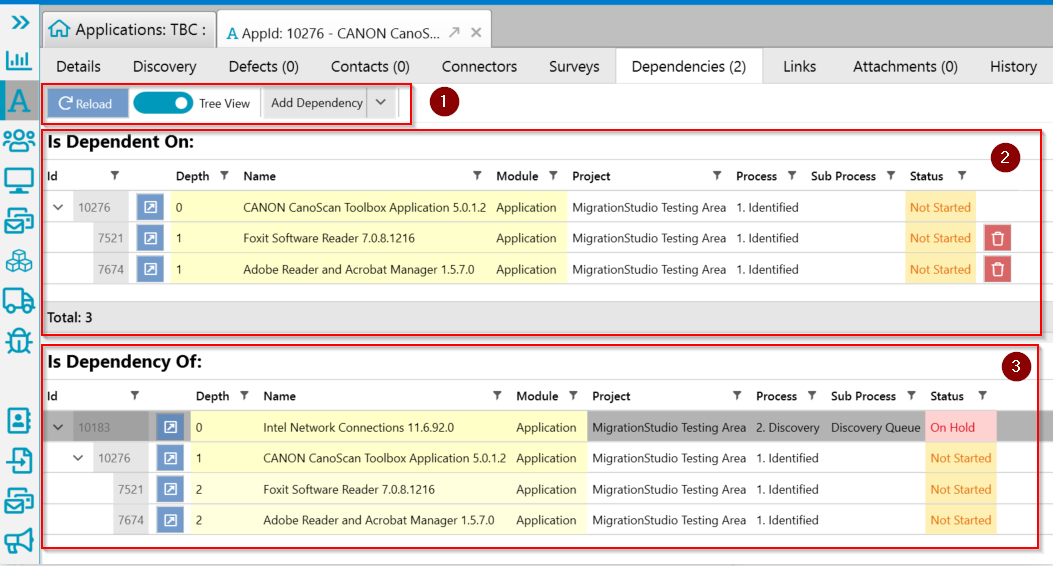 The Dependency screen is broken down into three areas:

The functionality of these areas is described below:

There are two possible ways of showing the dependency grid. Tree view shows a stepped or hierarchical view of all the dependencies and sub-dependencies for an object. In this view, the Id's are stepped to show the relationship between dependencies.

The List View shows a much more flattened representation of the dependencies, however it does have some advantages as there are a lot more analysis tools that can be used in this view:

The list view toolbar adds functionality such as search, select, pivot, export and copy to clipboard

Once clicked the Add Dependency dialog box appears and allows you to search across all objects in the chosen project: 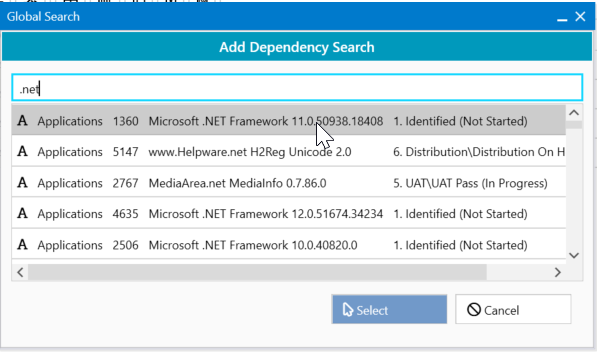 The Dependent On Grid

This grid shows what the current object is dependent on. For example in the below example "CANON CanoScan" is equally dependent on both "Foxit Software" and "Adobe Reader". It's possible to see which Project those two deliverables originate from and what process they are currently in.  The bin icon at the end of the row allows the deletion of 1st Level dependencies.

The Dependency Of Grid

This grid is informational and shows what deliverables are dependent upon the current object. In the case below, we are looking at "CANON CanoScan". It is possible to see that this software is a dependency of "Intel Network Connections"

In the example above its possible to see that "CANON CanoScan" is required for "Intel Network Connections" to work, and in turn has dependencies on Foxit and Adobe. In this way, we can look up and down the tree of dependencies to ensure that all deliverables are prepared. Any changes to a dependency can be tested accordingly.

marker to check if these have been implemented

If you require further support, please visit ManagementStudio's Service Desk to search the knowledge base or create a new support ticket.

Did you find it helpful? Yes No

Send feedback
Sorry we couldn't be helpful. Help us improve this article with your feedback.